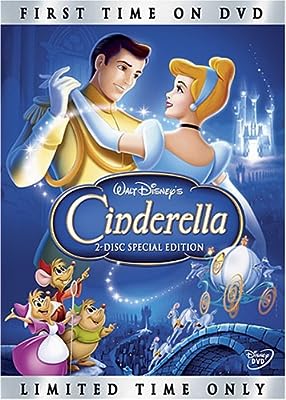 Price: $19.89
As of 2021-04-10 09:16:26 UTC (more info)
Product prices and availability are accurate as of 2021-04-10 09:16:26 UTC and are subject to change. Any price and availability information displayed on http://www.amazon.ca/ at the time of purchase will apply to the purchase of this product.
Availability: Not Available - stock arriving soon
Buy Now from Amazon
Product Information (more info)
CERTAIN CONTENT THAT APPEARS ON THIS SITE COMES FROM AMAZON SERVICES LLC. THIS CONTENT IS PROVIDED 'AS IS' AND IS SUBJECT TO CHANGE OR REMOVAL AT ANY TIME.

Worry not, Disney fans--this special edition DVD of the beloved Cinderella won't turn into a pumpkin at the stroke of midnight. One of the most enduring animated films of all time, the Disney-fied adaptation of the gory Brothers Grimm fairytale became a classic in its own right, thanks to some memorable tunes (including "A Dream Is a Wish Your Heart Makes," "Bibbidi-Bobbidi-Boo," and the title song) and some endearingly cute comic relief. We all know the story--the wicked stepmother and stepsisters simply won't have it, this uppity Cinderella thinking she's going to a ball designed to find the handsome prince an appropriate sweetheart, but perseverance, animal buddies, and a well-timed entrance by a fairy godmother make sure things turn out all right. There are a few striking sequences of pure animation--for example, Cinderella is reflected in bubbles drifting through the air--and the design is rich and evocative throughout. It's a simple story padded here agreeably with comic business, particularly Cinderella's rodent pals (dressed up conspicuously like the dwarf sidekicks of another famous Disney heroine) and their misadventures with a wretched cat named Lucifer. There's also much harrumphing and exposition spouting by the King and the Grand Duke. It's a much simpler and more graceful work than the more frenetically paced animated films of today, which makes it simultaneously quaint and highly gratifying. --David Kronke

For another of its classic films, Disney delivers another dazzling DVD with a gorgeous, razor-sharp picture and 5.1 sound. (Note: The 1949 film is properly presented in full-screen format, 1.33 aspect ratio, because widescreen films weren't made until the '50s.) The best part of the supplemental features is the archival material, the absolute highlight of which is two unused songs, "Cinderella's Work Song" (in which Cinderella imagines multiplying herself à la the Sorcerer's Apprentice) and "Dancing on a Cloud."

Because these numbers were never animated, they're accompanied by stylish illustrations from the Disney artists, and they're simply marvelous to look at. The artist of much of that material, Mary Blair, gets her due in a 15-minute featurette, while the better known "Nine Old Men" are the subject of a round-table discussion among some of today's top animators. In addition, a 38-minute documentary covers their contributions to specific characters of Cinderella as well as the film in general and the vocal cast. Also on the historical side is "The Cinderella That Almost Was," tracking the development of the project through decades of original Disney concepts, characters, and songs, including the 1922 silent "Laugh-o-Gram," which is also included in its entirety.

Additional musical material includes three radio programs and a short promo of the movie by Perry Como, in which he summarizes the plot amid some songs by the Fontaine Sisters, star Ilene Woods, and the host himself.

Seven other unused songs (17 minutes total) are available in audio only. The material for kids is on the sparse side, consisting of two music videos, Disney Channel personality Sally (from "Mike's Super Short Show") learning how to become a princess with the help of the Extreme Makeover: Home Edition crew and others, a minor dancing-princess feature, and a DVD-ROM design studio. Oddest extra: ESPN's "top Cinderella stories," including the 1980 U.S. Olympic hockey team and Joe Namath's New York Jets, although stories on Mia Hamm and tennis's Williams sisters should appeal to the film's primary target audience of young girls. --David Horiuchi

Cinderella Throughout the Years