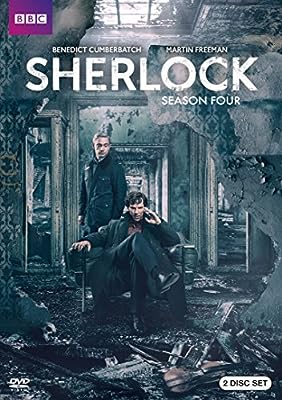 Price: $20.00
As of 2021-03-06 21:07:55 UTC (more info)
Product prices and availability are accurate as of 2021-03-06 21:07:55 UTC and are subject to change. Any price and availability information displayed on http://www.amazon.ca/ at the time of purchase will apply to the purchase of this product.
Availability: Not Available - stock arriving soon
Buy Now from Amazon
Product Information (more info)
CERTAIN CONTENT THAT APPEARS ON THIS SITE COMES FROM AMAZON SERVICES LLC. THIS CONTENT IS PROVIDED 'AS IS' AND IS SUBJECT TO CHANGE OR REMOVAL AT ANY TIME.

Mr. Sherlock Holmes, an intense investigative genius, lives in contemporary London. He is consulted by the Metropolitan Police Service when they need his help in solving baffling crimes. He has access to a pathology lab where he's ably served by an assistant named Molly. Sherlock's skills lie in his ability to notice minute details others might miss and to see their inner connections. His flatmate is Dr. John Watson, a veteran recently returned from Afghanistan. Watson, though highly intelligent, is always a step behind Sherlock, whom he admires greatly. He documents Sherlock's fascinating cases on his blog. Despite his many successes, Sherlock has detractors as well as admirers. He also has a sadistic, twisted nemesis by the name of Jim Moriarity.

Manchester By The Sea [Blu-ray] (Bilingu...